Fine Spirits singing “The Star-Spangled Banner” to open the Frisco RoughRiders game against the Corpus Christi Hooks on Monday, 25 June 2012

Fine Spirits will be entertaining the crowd tomorrow at Dr Pepper Ballpark in Frisco, Texas.

The Game starts at 7:05 pm, but come early and listen to some good a capella music.

Buy me some peanuts and Cracker-Jack!

Who Was That Masked Man??

Strange things were afoot last night at the AirHogs game.

I don’t mean that Fine Spirits gave a rousing performance. That’s not so strange at all.

I don’t mean that the AirHogs won the game. That’s not so strange either. They’ve been on a real winning streak lately.

What was strange (in a magical, how-cool-is-that kinda way) is that, after the game, when the guys broke into “Take Me Out To The Ballgame” for Chris’ Dad, David, as an early Father’s Day tribute, a passer-by stopped and inquired about the singing. And, as it turns out, he had sung in a barbershop quartet before, himself.

And, right there, outside the stadium, he and the guys sang, “My Wild Irish Rose.”

Together. Five instead of the usual four.

One song and then he was gone…

Sayyy, who was that masked man?

Well, we made a few appearances at our local cafe on “open mic” night. We opened the game between the Grand Prairie Airhogs and the Newark Bears, also singing the National Anthem at Lone Star Park. Then we had a very productive photo shoot with Joe Selby, a professional photographer from Carrollton, Texas.

We will be going into the studio to record several songs we’ve sung in the past. The audio will be available here on this site soon after. We are looking to making a CD in the near future, too.

After you hear us, you might ask yourself, “where can I go to hear this group live?” Keep visiting our site, and click on “Upcoming Events”. We will keep you undated on all our public appearances. We love our fans, and we know you love our sound. So, this is a win-win.

Again, thanks to Joe Selby for the awesome photos. 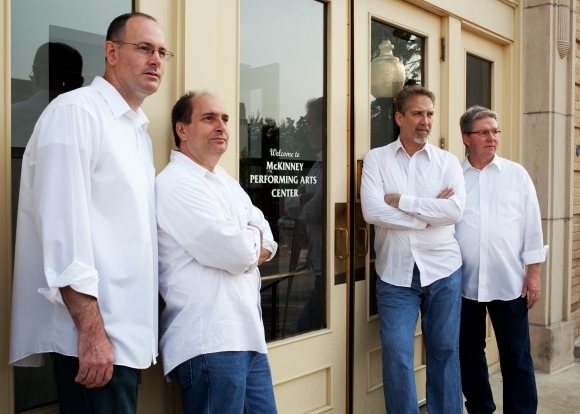